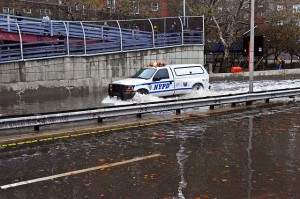 As the stories from the terrible night hurricane Sandy made landfall and the aftermath keep coming in, one thing is clear: there was no shortage of heroes that night, or in the recovering days still going on. However we did want to highlight some of the heroism that went on, and say thanks to everyone who lent a hand.

On the night the hurricane struck, power was lost in most areas of mid and lower Manhattan. While every hospital has emergency back-up generators for just such an event, the back-up generators at NYU Langone Medical Center failed, leaving roughly 300 patients and their providers in the dark. So EMTs and other rescuers stepped up, forming a caravan of ambulances and safely evacuated all the patients, including those in critical care, and 20 babies, amid 70-mile per hour winds. Even with the huge storm imminent, those men and women stood fast and were willing to sacrifice their own safety to see these patients to other hospitals.

After the storm hammered New York, 25 million gallons of water began to flood into the basement of Bellevue hospital, disabling the fuel pumps for the generators 13 flights above. So doctors, nurses and administration created a chain to pass buckets of fuel up all 13 flights to the generators. The next day the elevator shafts had flooded, so an evacuation was ordered. Adult and infant patients were assisted down to another waiting caravan of ambulances and taken to other hospitals.

These are just two stories among many of heroic deeds during the storm, but the sacrifice by these medical professionals resulted in zero loss of life as a result of the hospital evacuations, which is impressive considering what fragile condition many patients were in. So we thank you all, for your dedication to preserving life.