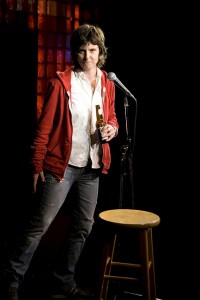 Tig Notaro, a comedian known for her witheringly dry, deadpan delivery, has released a stand-up comedy set about her cancer diagnosis, just in time for National Breast Cancer Awareness Month. In addition to being a veteran comedian who has garnered legions of fans coast to coast, Tig has been seen in her own Comedy Central special, and as a scene-stealing cop on The Sarah Silverman Program.

After being diagnosed with breast cancer in both breasts, and with a grim prognosis, Tig went onstage in Los Angeles and spoke about the experience in her own raw, hilarious way. The set was recorded, and comedian superstar Louis C.K. decided to release it on his own website.

Since that performance Tig has had a double mastectomy and now has a positive prognosis, as the cancer did not spread to her lymph nodes. If you’d like to purchase the 30-minute set, it’s only $5, and 4 of those dollars go directly to Tig. Comedy can be a great way to share a difficult, personal subject like breast cancer, and we wish Tig all the best during her recovery.

Every October, the color pink shows up in full force. From lapel pins to NFL uniforms, people integrate pink into their wardrobes to support breast cancer awareness month. As an awareness campaign, it’s incredibly successful. But awareness is just the first step. From awareness, public health education and advances in research are possible.

Besides skin cancer, breast cancer is the most commonly diagnosed cancer among American women. About 1 in 8 U.S. women will develop invasive breast cancer over the course of their lifetimes. As of 2015, there are 2.8 million women in the U.S. with a history of breast cancer. This includes women currently being treated and women who have finished treatment.

Lydia Komarnicky, MD, professor and chair of the Department of Radiation Oncology and a member of the board of the Susan G. Komen Foundation, says wearing pink “reminds people of the importance of the month of October and to get a mammogram if you have forgotten. More importantly I think the pink shirt, ribbon, hat, or merchandise of your choice honors those who have successfully beaten the disease, those who are currently battling the disease, and also reminds us of those that have succumbed to the disease.”