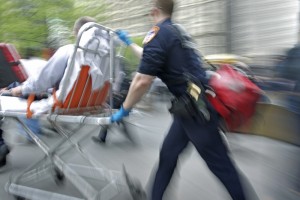 The career of an Emergency Medical Technician can be stretches of dullness punctuated with excitement, but in most movies EMTs are relegated to cleaning up in the background after the action goes down. There are a few movies that shift the focus to the men and women serving as EMTs, and here are some of our top picks.

”Bringing Out The Dead”. This 1999 Martin Scorsese film is based on the Joe Connelly novel of the same name. Nicolas Cage stars as a paramedic with psychological problems such as seeing ghosts of patients he failed to save in the past. The tone of the film is frantic and uneasy, and you get the feeling anything can happen at anytime.

”Mother, Jugs & Speed”. Bill Cosby played the role of ambulance driver ‘Mother’ in this 1976 dark comedy, which also starred Harvey Keitel and Raquel Welch as Speed and Jugs, respectively. Similar to “Bringing Out The Dead”, this film is populated with dangerous, erratic characters.

”Daylight”. This 1996 disaster movie starred Sylvester Stallone as a disgraced EMT who gets a second chance when an explosion collapses a traffic tunnel under the Hudson river. While the movie is light on actual EMS action, it is a nice change to see Stallone’s character responsible for saving lives instead of taking them.

”The Ambulance.” Eric Roberts and Edward James Earl Jones star in this thriller about an ambulance that takes people to a black market body parts harvester instead of the hospital. The film’s tagline is appropriately corny: “You’ll be in perfect health before you die.”

”Ambulance Girl.” Kathy Bates nearly won an Emmy for her role in this 2005 made-for-TV movie about a bipolar woman who wants to leave her food critic job and become an EMT. The story is based on the real memoir from author Jane Stern.