Most people only hear about deep vein thrombosis while reading the safety materials on a commercial flight, but it’s a potentially life-threatening condition that affects about 1 in 1000 adults every year. 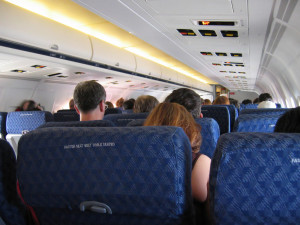 Deep vein thrombosis, or DVT, occurs when a blood clot forms in a deep vein, usually in a leg. The condition can cause pain and swelling, and becomes dangerous if the clot detaches and moves to the lungs, clogging the main artery. This is known as a pulmonary embolism, and when combined with DVT becomes its own condition, known as venous thrombosis.

Symptoms of DVT can include acute pain in the leg, swelling, unnatural warmth, redness, and bulging surface veins. Roughly half of all people affected show no symptoms, however.

Some common causes of DVT are major surgery, pregnancy, obesity, and extended immobilization of the legs, such as bed rest or sitting on a plane. Basically anything that favors blood clotting can put a person at risk, such as non-O blood type, or simply old age.

A doctor can diagnose DVT by using an imaging device, such as an ultrasound, CT scan, or by injecting a dye into the veins to take an x-ray, known as a venography. There is also the D-dimer test, which can indicate a blood clot due to elevated levels of fibrin degradation product, or in layman’s terms, the byproduct of a clot dissolving.

Prevention is key to avoiding DVT, especially in at-risk individuals. Exercise that encourages leg circulation, such as walking and bicycling, are effective at maintaining vein health. In at-risk individuals, or those recovering from leg surgery, compression stockings can be used to encourage circulation. If you’re on a long flight, try to get up and stretch your legs and walk in the aisle, or use a compression stocking.